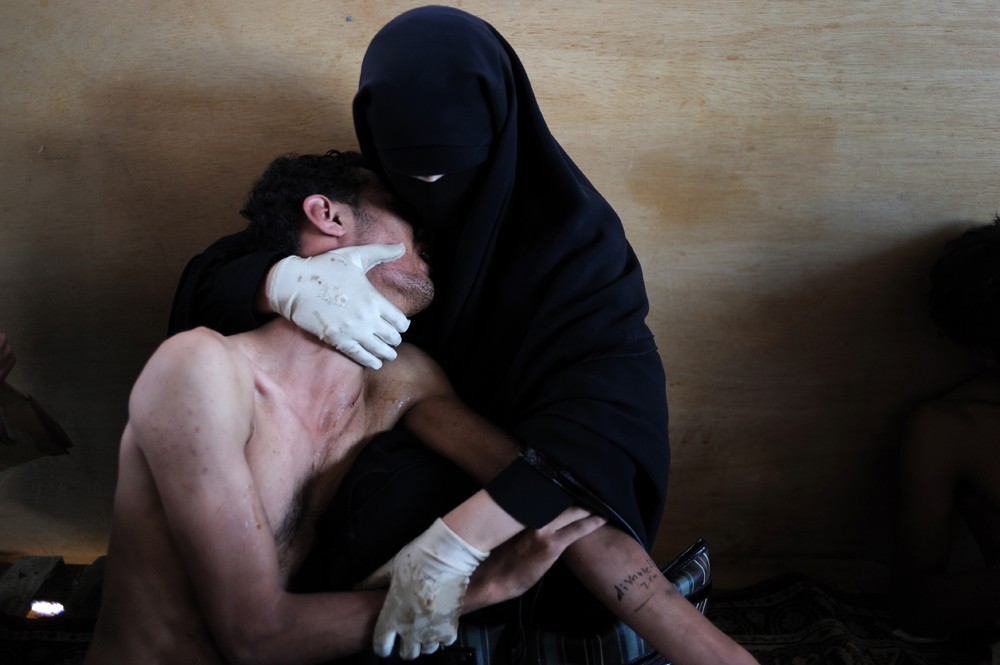 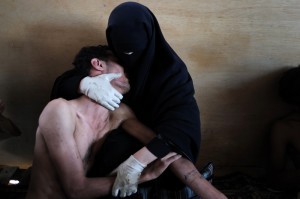 Comments on the winning photo by the jury

“It is a photo that speaks for the entire region. It stands for Yemen, Egypt, Tunisia, Libya, Syria, for all that happened in the Arab Spring. But it shows a private, intimate side of what went on. And it shows the role that women played, not only as care-givers, but as active people in the movement.”

“In the Western media, we seldom see veiled women in this way, at such an intimate moment. It is as if all of the events of the Arab Spring resulted in this single moment — in moments like this.”

“The winning photo shows a poignant, compassionate moment, the human consequence of an enormous event, an event that is still going on. We might never know who this woman is, cradling an injured relative, but together they become a living image of the courage of ordinary people that helped create an important chapter in the history of the Middle East.”

“The photo is the result of a very human moment, but it also reminds us of something important, that women played a crucial part in this revolution. It is easy to portray the aggressiveness of situations like these. This image shows the tenderness that can exist within all the aggression. The violence is still there, but it shows another side.”

Now in its 55th year, the annual World Press Photo Contest is universally recognized as the world’s leading international contest for photojournalists, setting the standard for the profession. The judging is conducted at the World Press Photo office, where all entries are presented anonymously to the jury, who discusses and debates their merits over a period of two weeks. The jury operates independently, and a secretary without voting rights safeguards a fair procedure.

A group of 19 internationally recognized professionals in the field of photojournalism and documentary photography have convened in Amsterdam from 28 January until 9 February 2012 to judge the entries.

Following the judging of the contest, the 2012 jury decided to give a Special Mention to an image of a Libyan National Transition Council fighter pulling Muammar Gaddafi on to a military vehicle. The still image was taken from a video shot in Sirte, Libya, 20 October 2011.

Chair of the jury Aidan Sullivan commented: “The photo captures an historic moment, an image of a dictator and his demise that we otherwise would not have seen, had it not been photographed by a member of the public.”

Jury member Renata Ferri said: “This was an important document for posterity, for transparency, and to understand the dynamics of how Gaddafi came to his end.”

The jury considers a visual document for a Special Mention when it has played an essential role in the news reporting of the year worldwide and could not have been made by a professional photographer.

Samuel Aranda, the photographer of the World Press Photo of the Year 2011, will receive the award during an awards ceremony in Amsterdam on Saturday, 21 April 2012. The award also carries a cash prize of €10,000. In addition, Canon will donate a Canon EOS Digital SLR Camera and lens kit to Aranda.

The awards ceremony is preceded by a two-day program of lectures, discussions and screenings of photography. The exhibition with the award-winning images will be open to the public at the Oude Kerk, Oudekerksplein in Amsterdam on Friday, 20 April 2012. The exhibition in Amsterdam is sponsored by Delta Lloyd and will be on show until 17 June.

At the same, time a worldwide tour of the exhibition will be launched. With a record number of 105 venues in 45 countries for the World Press Photo 11 exhibition last year, our exhibition program has established itself as the most popular and wide-ranging traveling photo event in the world. With the yearbook distributed internationally in seven languages, the winning images will reach a worldwide audience of millions in the course of the year.

The winners of the second Multimedia Contest will be announced online on 15 March 2012.

The judges will convene in Amsterdam at the beginning of March. The 2012 Multimedia Contest jury is chaired by director Vincent Laforet, France/USA.

For more information on the 2012 Multimedia Contest, please visit: .

World Press Photo receives support from the Dutch Postcode Lottery and is sponsored worldwide by Canon.

JOIN OVER 96,386 and receive weekly updates!