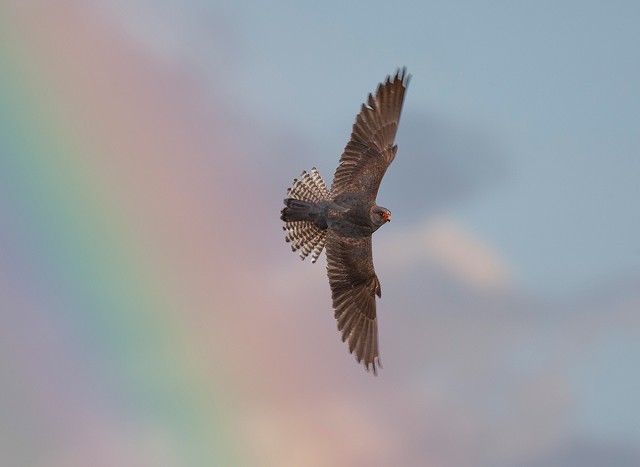 Winner of BirdGuides Photo of the Year 2011

The Winner of the BirdGuides photo of the year 2011 has been selected.

MA: “A stunning first-summer male Red-footed Falcon that spent a couple of weeks at Horsey in Norfolk in June gave several photographers the chance to catch up with a species not often encountered in the UK. Although this bird spent much of its time sitting on a fence post, bird photographer Kevin Du Rose managed to bag a varied portfolio of portrait and flight shots. Persevering through what many would regard as ‘unfavourable’ weather for bird photography, Kevin showed that showery conditions are an opportunity to capture atmospheric images. Our pick of these is a superb banking flight shot of the falcon flying in front of a rainbow. Who would have thought we’d have seen such an image of this scarce bird at the point when the first reports and photos started coming in? Kevin showed that a classic ‘record shot’ situation can be turned into a chance to shine.”

JH: “Good wildlife photography can capture what the eye doesn’t see and the brain can’t process quickly enough. I just wish I’d managed to see what Kevin has photographed here. A smart first-summer bird would be good enough for most, but this shows the shape of every flight feather, including the barred outer tail, fanned as the bird banks over Horsey. The primary tips may be slightly out of focus, but this simply accentuates that this is a bird moving at speed. Against a grey sky, this would be a good picture, but the background rainbow complements the splash of deep red at the base of the falcon’s bill. Magic!“

MT: “This flight shot of a Red-footed Falcon underlines how unexpected opportunities can sometimes present themselves. While this might be considered a ‘record’ shot, the atmospheric feel created by the presence of the rainbow make for something more dramatic. As the falcon banks sharply, we are presented with the bird, wings and tail spread, turning towards us.”

“I was trying to obtain flight shots of this bird which chose to spend some time only 15 minutes from my home. I spent an evening dodging torrential showers trying to photograph the bird.

I weathered a really heavy downpour under a brolly, as the bird was about a mile from the nearest shelter. Following the downpour an intense rainbow appeared against the storm clouds. The bird became active hawking moths, eventually hunting in a position where I thought it might fly in front of the rainbow.

I watched the bird as it came in line with the rainbow; by a sheer stroke of luck it swooped towards an insect and as I picked it up in the camera viewfinder it banked round directly in front of the rainbow. I clicked the shutter and immediately reviewed the shot on the back of the camera. It looked sharp but this was only confirmed on arriving home and getting the shot up on my computer.”

JOIN OVER 91,038 and receive weekly updates!