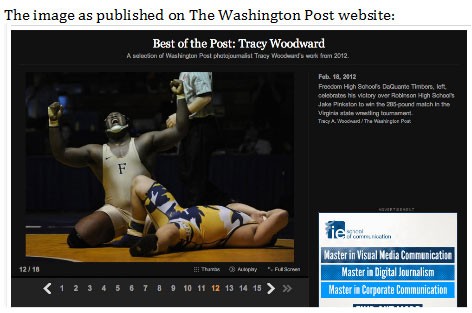 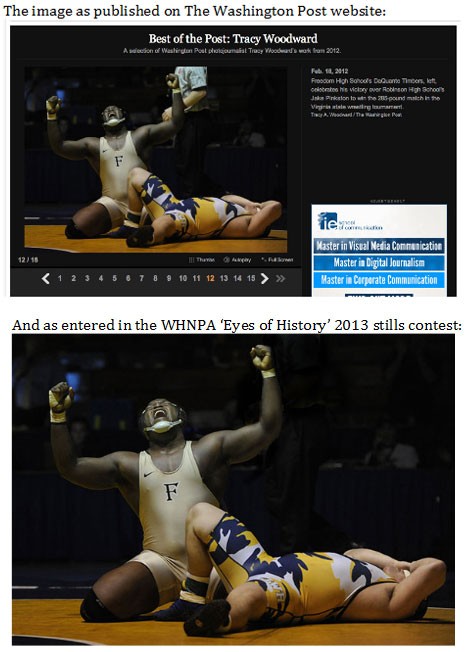 It was brought to our attention that the image “State Champion” by Washington Post photographer Tracy Woodward, that received an Award of Excellence in the 2013 WHNPA ‘Eyes of History’ stills photo contest in the Sports Feature / Reaction category, was digitally manipulated in violation of the contest rules. When we became aware of the altered image, the photo was immediately disqualified in accordance with our published contest rules.

This seems to be a common occurrence in some of the biggest photo contests and awards of late, there was also the recent disqualification of Harry Fisch’s ‘Preparing the prayers at the Ganges’ from the National Geographics Photo Contest 2012 and prior to that, David Byrne was disqualified from the Landscape Photographer of the Year award ‘Take a view’ for employing excessive digital manipulation in his winning entry.

With today’s’ digital photography, and in light of recent events, how realistic is it for us to believe a winning photo has fully complied with the contest rules? What steps should photo contest organisers be taking in the future to verify wining photos?

Share your views and tell us what you would do to ensure fair play in contests and awards.

JOIN OVER 94,627 and receive weekly updates!