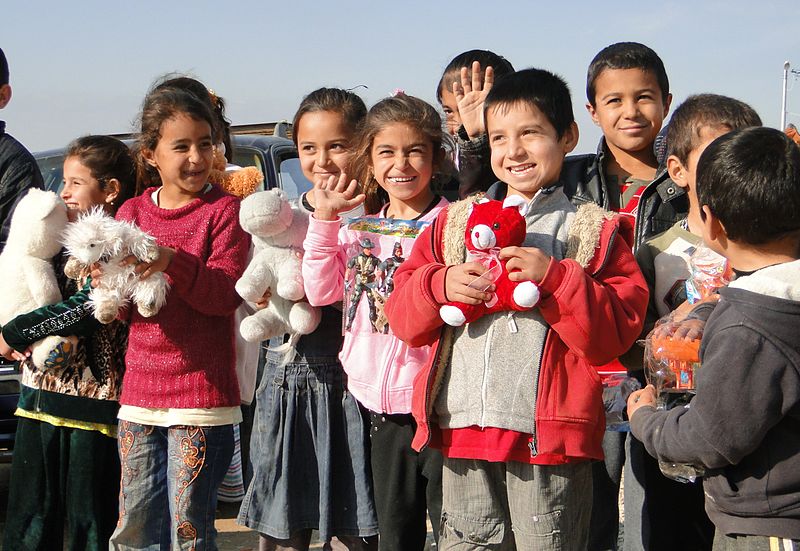 When a group of female Yazidi students were forced from their homes in Iraq by the advance of Islamic State, they were lucky to escape with their lives. Living in a refugee camp in Kurdistan, however, they were faced with little prospect of being able to return to their studies.

More than 400,000 Yazidis were forced to flee from Mount Sinjar in 2014, and when UNICEF offered a new photography course to those living in the Dohuk camp, Khawla Shammo was one of those to jump at the chance. The two-month course was a rare chance to study in a place where books and teachers were in short supply.

A chance to express themselves as well as a way of learning skills which might lead to future work was exactly what these female students needed, and some of them, including 21-year-old Khawla, have started to exhibit their work.

Their images, at times harrowing, represent the plight of the Yazidi people, who have been attacked very specifically by Islamic State – an attack that the UN describes as genocide. Documenting this terror is not easy for outsiders. The camp, which is a temporary home for around 18,000 people, is a place where Yazidi will only share their suffering with one another.

“We live together, we suffered and feel each other’s suffering, and we know how it is,” says Khawla.

For Khawla and others, like Manal, this course is a new chance to show the world what is happening. Manal’s work was exhibited at the American University of Iraq in Sulaymaniyah early in 2016, showing an intimate side to life in the camp at Khanke.

20-year-old Zina is another keen learner, though she found the course difficult at first. She explained that this was “because we don’t have a culture of imaging in our Yazidi society, and most girls aren’t involved in business”. She now wears traditional Yazidi dress like always, but with the addition of a digital camera that sits on a strap around her neck.

Some of the girls now hope to gain work as photojournalists. This is a break from tradition within the Yazidi society; however, with large swathes of their population now becoming refugees, it is important for them to be able to find a way to survive. This photography course could represent just that – a new chance for these girls to support their families and recover from the terrorist attacks meted out against them.

Sheyda Hessami is the photographer who devised the course. At first the refugees in the camps were reluctant to be part of the project, after months of seeing photojournalists from foreign countries digging around. However, opinions began to shift. It was a realisation that the story would be best told from within, a chance to show the outside world what their suffering is really like.

“Their photos have more impact… because they depict what they experience,” Hessami explains. “When a Yazidi woman stands before a Yazidi photographer who shares the same language and culture, they can feel and understand the little details of their lives, traumas and difficulties more than others.”

“My dream is to succeed in this work and to help my people. That is the most important thing. No one helps us so we should help ourselves,” Khawla says. It is clear that there is a lot of power in this course. Even those girls who do not go on to become working photographers will have learned something new and useful – specifically, the power to stand up for their people, to have a voice, and to perhaps find a way to support their families which does not have to be traditional.