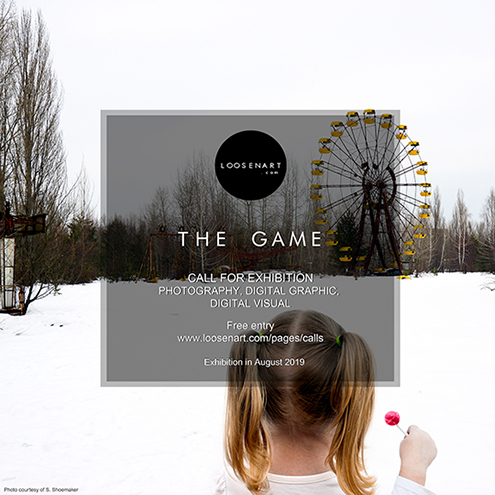 The Game │Call for exhibition

Since ancient times the concept of “game” has been taken on by countless philosophers, artists and writers, pouring into it a philosophical and conceptual value, as demonstrated by the writings of Aristotle, as well as those of Schiller, Kant and Huizinga.
Kant takes up the founding element of freedom in the game and associates it with the aesthetics where the judgment of taste is based on the “free play of our cognitive faculties” of the imagination and the intellect. Or again, Johan Huizinga can be considered as one of the major theoreticians of the game, the theme at the center of his work is Homo Ludens, which assigns to the play activity of man the driving force of art and science.
No less are the authors of the art world who bear witness to the interest in the subject.
Artists, photographers and visual designers are invited to propose works that address the theme of the game in a new perspective, which reconsiders the theme through aspects that mark the contemporary: globalization, new interactive media, gambling addiction, etc.

PRIZE DETAILS: Selected pictures will take part in the group exhibition in September 2019

FREE ENTRY
Photographers are invited to submit 1 to 3 artworks addressing the theme Not eligible to enter? - Find contest where you are.

COPYRIGHT: All photographs on LoosenArt are the sole property of their creators unless otherwise noted. No image on the site may be used in anyway without permission of the copyright owner. USAGE RIGHTS: Unless otherwise noted, all texts, images and video provided by artists and presents at this website are protected by copyright and remain property of the author. LoosenArt can use the content in communictation and promotion and printed material. All authors allow the Organiser, the right to use text and images related to artwork submitted to LoosenArt to create events associated with LoosenArt's calls for entries, use in LoosenArt archives and web sites, and in any form of communication chosen by the Organiser and its franchised organisations. All photographic material and any texts submitted to the web site for insertion will not be returned, but archived by the Organiser. No Content from the web site may be copied, reproduced, framed, hyperlinked, republished, downloaded, uploaded, posted, transmitted, or distributed in any way without permission either from the user who allow to insert the content or the Organiser.