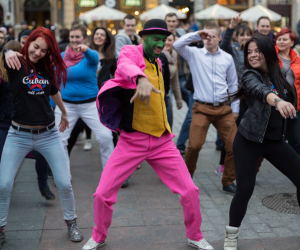 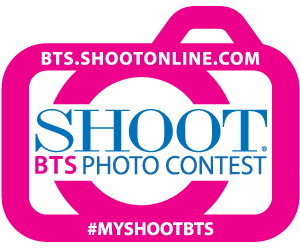 The Editors of SHOOT®, the leading publication and website for entertainment and commercial motion picture production & postproduction, have opened the call for entries for the SHOOT 2018 Behind The Scenes (BTS) Photo Contest – Summer Edition. Now, as the contest goes into its second year since launching, SHOOT invites amateur and professional photographers throughout the motion picture industry worldwide to enter the Contest. Entry is FREE. Entries for the 2018 Summer Contest will be accepted June 1st, 2018 thru September 7th, 2018 Midnight ET. For a detailed overview, entry form, entries gallery, and to vote, visit http://bts.SHOOTonline.com

Who Should Enter The SHOOT BTS Photo Contest is for any motion picture production or post crew members & actors to enter BTS photos from Films, TV, Commercials, MVs, and Web videos. The Contest is a perfect showcase opportunity for those who are creating, shaping and defining the world of the motion pictures production and post. The Contest is open to all amateur and professional photographers in the United States, Canada, and worldwide except where prohibited by law including actors, producers, writers, directors, cinematographers, editors, vfx artists, music & sound designers, production designers, art directors, costume designers, make-up artists, special effects gaffers & grips, carpenters, vfx animators, music & sound mixers, set unit still photographers, ADs, PAs, publicists, legal advisers, location managers, and others involved BTS in the filmmaking process. Participation in this contest is subject to the official rules at http://btsPhotoContestRules.SHOOTonline.com

The winning image will be published on a SHOOT magazine cover and the winning photographer will receive a minimum of $500. USD. Runner-up photo and honorable mentions will also receive cash & prizes. (Note: If sponsors are secured, SHOOT will award larger material or cash prizes.) And, during the Summer contest period, one (1) photo will be selected each weekday as “SHOOT Magazine BTS Summer Photo Contest ENTRY OF THE DAY” and will be posted to SHOOT BTS Photo Contest Instagram page as well as SHOOT’s Instagram, Facebook, and Twitter accounts.

The SHOOT BTS Photo Contest is a fun opportunity for our readers and followers to participate in documenting and showcasing who they are and what they do every day. The types of photographs we’re interested in seeing are listed below and should be interesting, fun, surprising and creative: — crew/talent pictures (individual or entire team) — in the studio or on location — on set, near set, stage, make-up, design, art, lighting, carpentry dept shots — post studio sessions: editing, recording, VFX, voiceover, etc. — cool frames & vfx screenshots — awards shows, wrap parties & catered meals — workflow / process images — equipment & software in action — funny, crazy, creative bts shots — other fun & interesting bts pics

How To Enter There are three (3) easy ways to enter:

3. EASIEST WAY Publicly share your BTS shot on on your Instagram*, Twitter*, or Facebook account and hashtag it #MySHOOTbts (include short description of photo, names of people (if any) in photo (i.e L to R), and required photo credit info, and hashtag #MySHOOTbts to enable the editors of SHOOT to identify the relevant entries.)

Submission Details & Period The SHOOT 2018 BTS Summer Photo Contest Entry Period commenced on June 1s, 2018 at 12 am Eastern Time (ET) and ends on September 7th, 2018 at Midnight Eastern Time (ET) (the Summer Contest Entry Period). Winners will be announced for the Summer contest period within 4-8 weeks weeks after the Emmy Awards® are announced in September. The contest is FREE to enter and photographers of all abilities are invited to submit photos. There is no limit to the number of photo submissions per entrant. Entries must be in digital format and submitted electronically in accordance with the contest guidelines and rules. Images must have been taken no longer ago than 3 years prior to the entry’s submission date. All entrants must be 18 years old or older. People may vote for multiple entries; however only one vote per person will be allowed per entry, per day during the voting period.

All contest photos will be displayed at the My SHOOT BTS Gallery and on SHOOT’s Facebook page. Submissions must identify the location of the photo.

Participation in this contest is subject to the official rules at http://btsPhotoContestRules.SHOOTonline.com

PRIZE DETAILS: The winning image will be published on a SHOOT magazine cover and the winning photographer will receive a minimum of $500. USD. Runner-up photo and honorable mentions will also receive prizes. (Note: If sponsors are secured, SHOOT will award larger material or cash prizes.) And, during the Summer contest period, one (1) photo will be selected each weekday as "SHOOT Magazine BTS Summer Photo Contest ENTRY OF THE DAY" and will be posted to SHOOT BTS Photo Contest Instagram page as well as SHOOT's Instagram, Facebook, and Twitter accounts. Not eligible to enter? - Find contest where you are.

COPYRIGHT: By submitting, you confirm that the images are lawfully yours (or your clients if agent) and you retain full copyright discretion. As between you and SHOOT, each entrant shall retain ownership of all intellectual property rights in the entry subject to the Official Rules. Photographs owned by a third party, are acceptable IF license has been secured to permit your submission to this contest and allows the Producer to use the images as outlined in all these rules.

If a submitted image includes other people, entrant must be prepared to provide a signed written personal release from all persons who appear in the image authorizing use of the image. Entrants do not need to send release(s) with submissions but will be contacted if personal releases are needed. Failure to provide the required releases will result in disqualification of the entry. SHOOT is in no way trying to infringe on the copyrights, work rules, union or guild rules or businesses of any movie, TV, commercial, other other motion picture producer(s). By entering this Contest, an entrant is indicating his/her bts photo(s), when taken, are not in violation of:

or infringe upon another person's, company's, or union/guild rights, including but not limited to U.S. copyright law, production vendor contracts, non-disclosure agreements, and employment contracts, etc.;
Any "work for hire" agreement or contract under under U.S. copyright law;
guidelines and policies set by the production company and/or studio and/or advertiser/brand or other motion picture producer
When shooting production and behind-the-scenes stills on set is being performed by a designated unit still photographer, do not interfere with the work of that production employee. Make sure that any photographs you take are within the guidelines and policies set by the production company.

At the sole discretion of the Producer, photos entered in the Contest that violate or infringe upon another person's or company's rights, including but not limited to copyright or "work for hire" copyright, producer or union/guild rules are ineligible and will be disqualified from the Contest. And, Contest Producer reserves the right to reject and remove any submissions deemed in violation of a production's rules, in place at time of when photo taken, or inappropriate in nature, without recourse or explanation. And the photographer, or their agent, may be banned USAGE RIGHTS: As between you and SHOOT, each entrant shall retain ownership of all intellectual property rights in the entry subject to these Official Rules. However, by entering the Contest, and to the extent allowed by law, entrant grants, but solely in relation to the promotion and/or advertising of the Contest and it’s print and digital displays, the Producer, the Producer's Sponsors, the Producer’s affiliates, licensees, promotional partners, developers and third party marketing entities a non-exclusive worldwide, royalty-free license, in perpetuity, to modify, rearrange, copy, reproduce and adapt the images only to fit the format required for product web pages and marketing materials; The copyright owner grants a license to publish and use the images themselves and the content of and elements embodied in the images, including any names, locations and likenesses, in perpetuity, in any and all media, including but not limited to print, digital and electronic media, computer, and audiovisual media (whether now existing or hereafter devised), in any language, throughout the world, and in any manner without further review, notice, approval, consideration, or compensation ONLY IN THE CONTEXT OF THE SHOOT "BEHIND THE SCENES" PHOTO CONTEST. Sponsors, its affiliates, partners consultants, will not commercially exploit the images and all such rights of commercial exploitation remain with entrants.

JOIN OVER 90,477 PHOTOGRAPHERS GET PHOTO CONTESTS VIA EMAIL FOR FREE