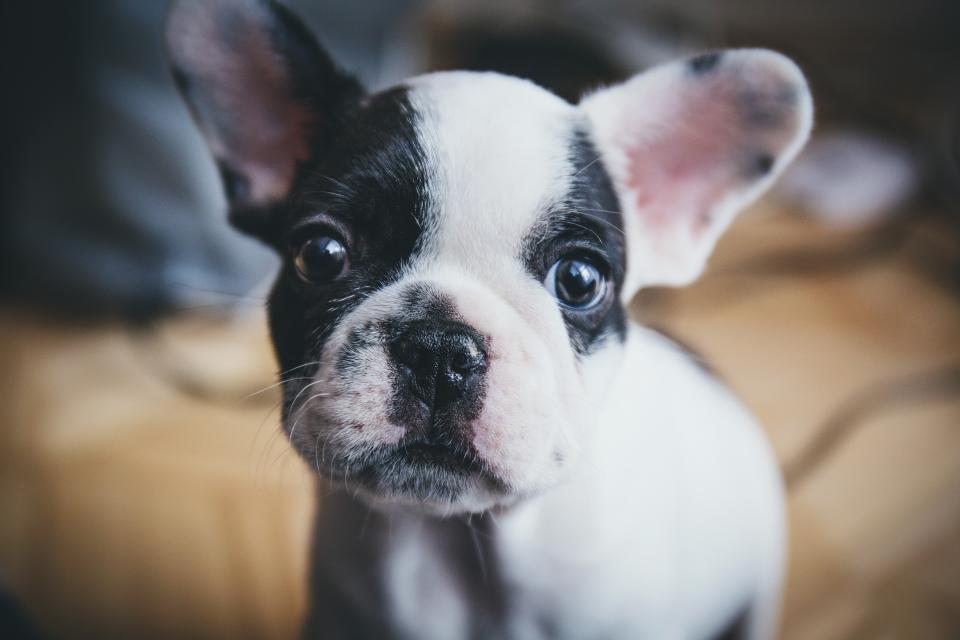 Photographers play an important role in society and one that is perhaps much more vital than some would initially think. Photography isn’t just a means of documenting the present for the future, but it’s also a brilliant way of visually exploring and supporting issues in order to challenge and change people’s perceptions.

One such issue is animal adoption and it has been strongly encouraging to see the multiple awareness campaigns which have flourished around this issue within the past few years. What is even more wonderful is the fact that many of these campaigns have been based on creativity, with talented individuals such as photographers joining forces with animal shelters and organizations to bring this important issue to the world stage – the internet.

We wanted to explore this very notion, so have featured 7 photographers supporting animal adoption through their photography. Get ready for their heart-warming stories! 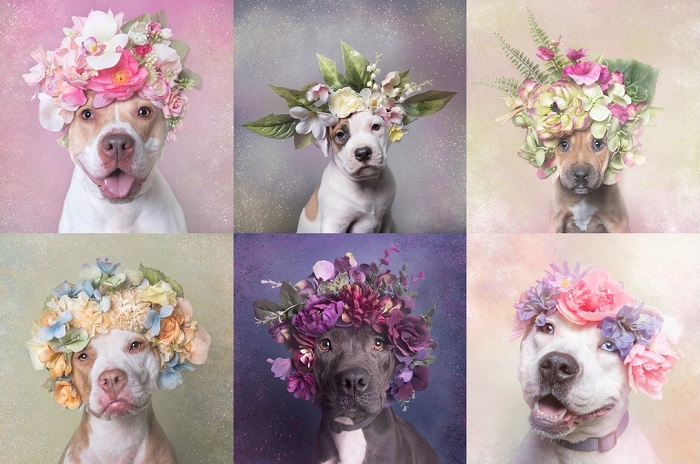 You may recognize these images from The Huffington Post (and just about everywhere else on the internet after going viral), but for those of you who don’t, they are from a series by photographer Sophie Gamand titled ‘Flower Power’.

The floral portrait series features pit bulls staring lovingly at the camera while adorned in a vibrant flower crown. The idea for this heart-warming project came about when Sophie was volunteering at animal shelters and discovered just how frequently the breed was at these places – more so than any other type of dog. She not only wanted to further highlight this sad realization, but also wanted to explore her own aversion to the breed.  “Were they bloodthirsty monsters? Or just dogs with a bad reputation?”, she asked.

In the U.S. alone, between 800,000 and one million pit bulls are euthanized every year. This is the shocking reality that further propelled Sophie to pursue this project. But what’s with the flower crowns, you ask? The idea is quite simple: “I decided to photograph them in a totally unexpected way, to see if new imagery could challenge the way we perceive them, and ultimately the way we treat them,” Sophie explains.

The photographer handcrafted each stunning flower crown and chose to style her images according to the conventions of traditional baroque portraiture. The end result is something to be truly admired; these dogs were often abused and neglected in their previous lives, however they are now showcased for what they truly are – precious yet fragile creatures with the chance of a brighter future. 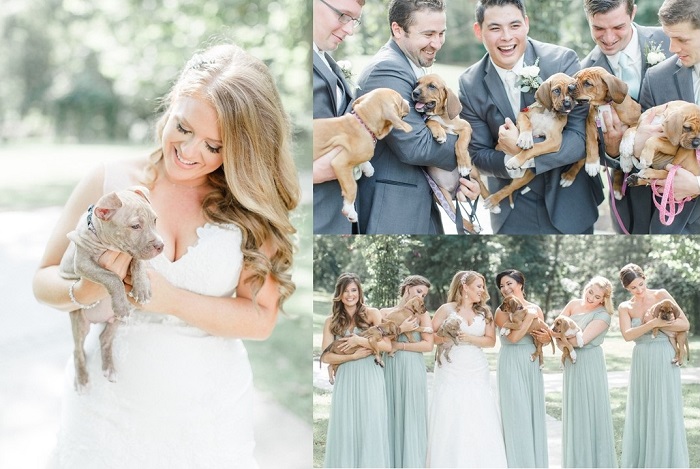 ‘Puppies instead of flowers’ photographed by Caroline Logan

When this wedding photo shoot went viral, it certainly came as no surprise – puppies replaced the more traditional bouquets of flowers – and for a good cause too.

The bride behind this idea is Sarah Mallouk Crain and she works for a rescue organization in central Pennsylvania known as Pitties Love Peace. For her and her husband’s big day, they wanted to incorporate their love of supporting animal adoption, so it only seemed fitting that the bridesmaids and grooms each had an adorable rescue puppy to hold!

Caroline Logan is the photographer who had the pleasure of capturing these special images and she also played a large role in spreading the positive animal adoption message. They were so beautifully captured that large websites and news organizations couldn’t help but want to re-post her photographs.

“The puppies of course caused the photos to be extra natural, candid, and carefree — exactly what I strive for in my work…Having the puppies involved in the wedding brought so much additional joy to Matt and Sarah’s day. Though they weren’t a part of the ceremony, they were involved in their portrait time.” 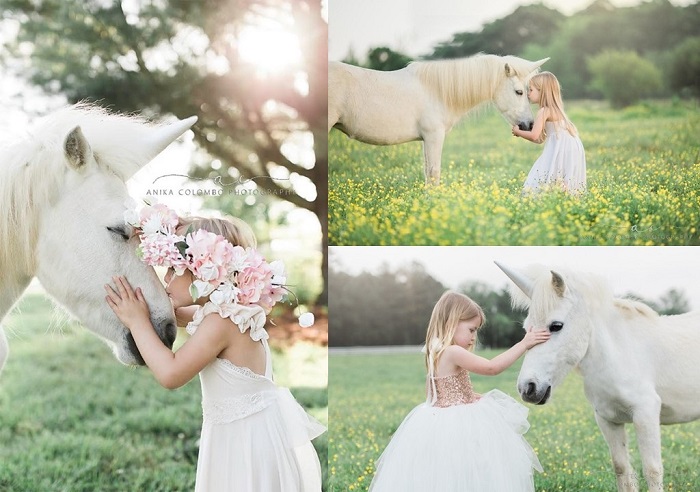 Anika Colombo is a Virginia based photographer who is embracing animal adoption in her photography in a whole new light – through her magical ‘Unicorn Sessions’ featuring mini rescue horse Poppy.

Anika has always specialized in capturing gorgeous portraits of children and families, however last year she came up with the idea of including the lovely Poppy in some of her sessions. From here, the notion of ‘Unicorn Sessions’ were born and so far they have proved to be immensely popular.

Anika states: “[Poppy] is fantastic with the children and as you can see, she often falls asleep while they hug and love on her and twirl around in their dresses.  I’ve had some amazing unicorn sessions this year!”

She further explains, “These unique, seasonal sessions are a once-in-a-lifetime experience for your little one.  You will never forget the wide-eyed stares of wonder and delighted giggles and squeals when your child sets eyes on a real life unicorn.  These photos will be cherished for years to come.”

Not only do these sessions provide parents with a stunning set of images that will remain dear to them for life, but Anika’s project is also a heart-warming reminder of the love and joy that a rescue animal can bring into anyone’s life.

When the Humane Society of Utah, an animal rescue and adoption organization in the U.S., wanted to showcase their shelter dogs in a more positive light, they enlisted the help of pet photographer Guinnevere Shuster.

The aim was to show these dogs in the way they’d really look if people allowed them into their lives. When people consider adopting an animal from a shelter, too often their minds are filled with negative imagery such as sad, underfed dogs peering out from behind metal bars.

Instead, this project showcases the pooches in a fun photo booth style, with the dogs interacting with treats, toys, and simply the camera. From sleepy squints, to tongues poking out, and paws waving in the air – it’s clear that these pups would make any family happy.

Another wonderful thing is that this project celebrates each dog’s individual dispositions, rather than simply grouping them together as personality-lacking pound dwellers. They’re happy, vivacious, and adorable animals, all worthy of a second chance at life in their ‘forever homes’.

What’s even better is the fact that this photographic collaboration between Guinnevere Shuster and the Humane Society of Utah is actually working – many of these pooches have already been adopted since gaining plenty of attention through the campaign! 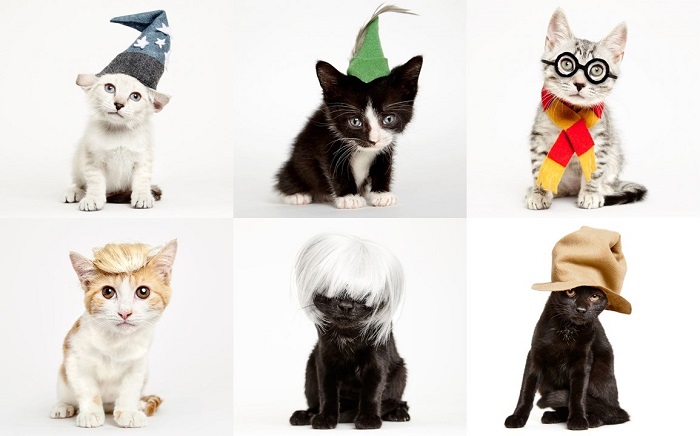 ‘Hats for Cats’ by Shaina Fishman

Did you know that approximately 3.4 million cats enter animal shelters every year in the United States? This fact was the driving force behind the project ‘Hats for Cats’, a collaboration between Brooklyn Animal Action, photographer Shaina Fishman and fashion stylist Ryen Blaschke.

This photographic project sees both Shaina and Ryen handcraft miniature versions of iconic hats and accessories (such as Robin Hood’s hat and Harry Potter’s glasses) before adorning homeless shelter cats and kittens in them and pressing the shutter button.

The pair knew that they had to be inventive and think of new ways in order to encourage cat adoption. Photographer Shaina states:

We wanted to create a light-hearted series featuring rescue cats and kittens that are up for adoption. With so much exposure on dog rescue we wanted to bring attention to the much-overlooked topic of cat rescue. Customized hats were handmade by Ryen and then shot by me on rescued cats from Brooklyn Animal Action, in the homes of volunteers fostering the cats. All cats deserve a loving home and a ridiculous costume, don’t you think?

Through promoting the cats in such an adorable and quirky light, the pair knew that the project would gain traction online, reaching a much larger audience than the organization would’ve managed alone. The aim is that people will then step forward and want to take any of the cats home with them. 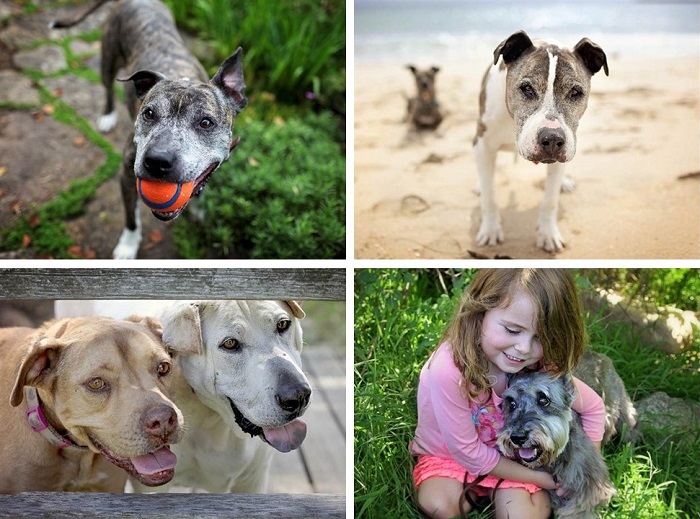 Like many people, the thought of adopting an older dog always made Lori Fusaro a bit uncomfortable and it was something she thought she would never consider doing.

The photographer began offering her services voluntarily to assist some of L.A’s packed animal shelters and it was then that the plight of elderly dogs on death-row became evident to her. The dilemma? Because of their older age, they were often bypassed by viewers in favor of younger dogs.

During one of her sessions at an animal shelter, Lori met a 16-year-old dog named Sunny and was instantly drawn to her sweet disposition. After seeing first-hand the joy that an older dog can bring into a home, the photographer was inspired to begin her ‘Silver Hearts’ project in the hopes of shining a light on the pros of adopting dogs who are ‘a bit grey around the muzzle’.

“All I really care about is changing the perception of older dogs,” she explains. “They might be slower and they might sleep a little more, but all the old dogs I’ve met in this past year like to play with their toys and chew on their bones. They still have that zest, that joy for living.”

After seeing her candid and heart-warming photos of adopted older dogs, it’s clear that the photographer’s project is certainly achieving this. 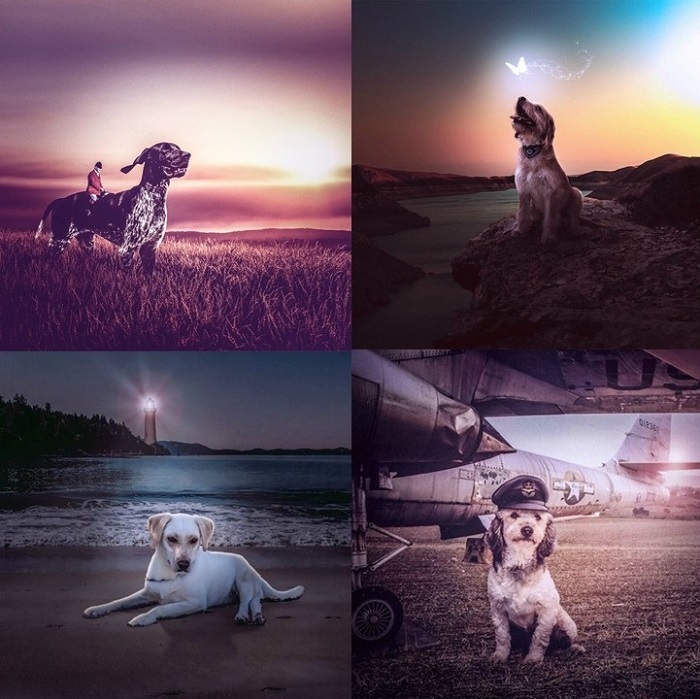 This is perhaps one of the most creative adoption awareness-raising campaigns you’ll find. Photographer Stuart Holroyd partnered with Bay Tree Rescue in order to try and make a positive change for the growing number of stray and abandoned dogs in his neighborhood.

The result? An array of glamorous pooch photo shoots featuring whimsical elements, all with the aim of celebrating each dog for its unique personality. By presenting these animals in a completely different and celebratory light, Stuart believes that it will increase their chances of not just getting noticed, but being adopted too.

In these photo shoots, the photographer really works his magic, even turning one little pooch (Millie, a dog with a hind leg disability) into a mermaid, while others bask under the moonlight or act as a giant and noble steed (pictured).

It really is hard to ignore the beauty of this project and Stuart himself had high hopes for the outcome of the campaign. Now that the series is complete, the images have been compiled into a photobook with proceeds donated towards helping the Bay Tree Rescue Center even further.

We hope that these 7 photographers supporting animal adoption through their photography have inspired you to tackle important issues and raise awareness for matters that are close to your heart. As a photographer, you have a very special gift and it’s always motivating and uplifting to see those using it to bring about positive change.

JOIN OVER 90,478 and receive weekly updates!