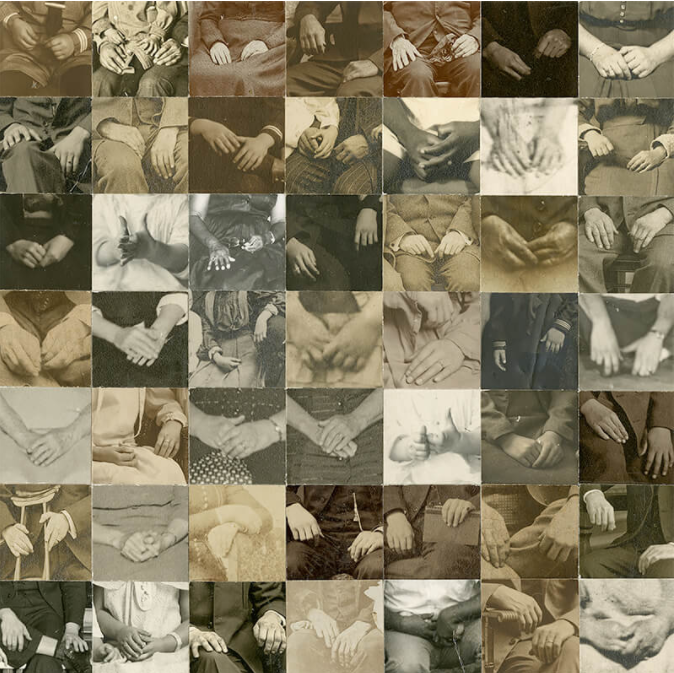 We are looking for ONE photograph from each artist using vernacular, family, or found photographs in their work.

Greg Sand is a Tennessee based artist with a BFA in Photography from Austin Peay State University. He works almost exclusively with found photography and vernacular images to explore memory, the passage of time, mortality, and the photograph’s role in shaping our experience of loss. Colossal describes his current approach to art as “analog super-edits of the repeated patterns found in old photographs. Drapery, flowers, shoes, shadows, hands, and faces are homed in on and grouped into enormous grids, representing the simultaneous enormity and specificity of human death.”

Sand has been featured in numerous solo and group exhibitions across the country and has received recognition from many jurors, including Guggenheim Assistant Curator Ylinka Barotto and acclaimed artists Shana and Robert ParkeHarrison. His work has been featured in many publications including Colossal, Liberation, Lenscratch, Don’t Take Pictures, and Flow Magazine and has been included in books such as Manifest Press’s International Photography Annual and Gestalten’s Cutting Edges: Contemporary Collage. Sand has received an Individual Artist Fellowship from the Tennessee Arts Commission and was selected by renowned Chicago art dealer Catherine Edelman as her Critic’s Pick at the Griffin Museum of Photography. He has worked with Young & Rubicam to produce a blood donation advertising campaign in Brazil and was commissioned by the Sundance Film Festival to create an original piece. He is represented by Momentum Gallery in North Carolina and Pulp in Massachusetts.

JOIN OVER 89,344 PHOTOGRAPHERS GET PHOTO CONTESTS VIA EMAIL FOR FREE