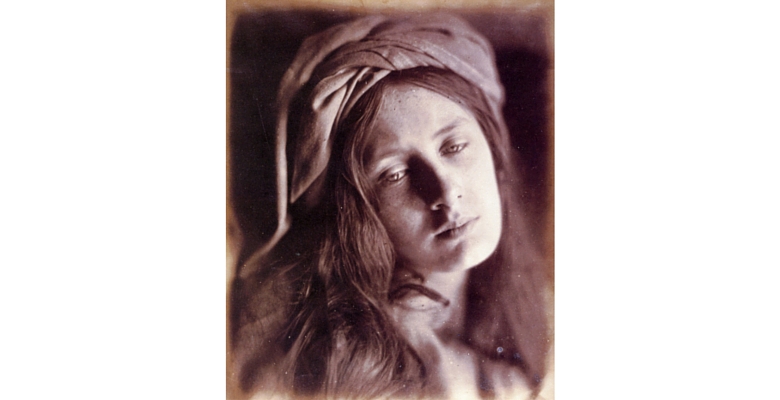 In the Spotlight: Julia Margaret Cameron

Julia Margaret Cameron was born in 1815, which makes this year the bicentenary of her birth. This celebrated Victorian photographer only spent eleven years taking photographs, after being given a camera at the age of 48 as a present. Nonetheless, her portraiture is famed and influential. With plenty of exhibitions taking places to celebrate this notable anniversary, it’s time to take a closer look at her body of work and legacy.

Cameron was a member of the Photographic Societies of both London and Scotland from 1864 to her death in 1879, and much of her work has been preserved. She created two main bodies of work: her portraits, often of family members or friends, and her photographic illustrations which were intended to portray characters from history or myth.
She took photographs of many famous subjects due to the fact that her sister was very closely linked to the art world. The people to sit in front of her lens included Alfred Lord Tennyson, who was a big fan of her work and brought many of his own friends to sit for her; Charles Darwin, Robert Browning, John Everett Millais, William Michael Rossetti, the Shakespearean actress Ellen Terry, and more. Her intent was to capture the personality of the subject, many of whom she knew very well.
Her illustrations were also successful, and although art critics are often dismissive of this part of her work, she considered them to be just as artistic as the oil paintings that she sought to emulate. Indeed, they were looked on favourably by at least some contemporaries, as Tennyson asked her to provide photographs as illustrations for his work Idylls of the King. The illustrations would include historical costumes, draped fabric to create an interesting setting, and often a repeated focus on portraying the same character with different models.

She learned her techniques under the tutelage of David Wilkie Wynfield, and later said that she attributed all of her success to his teachings. She was influenced by the Pre-Raphaelite movement to emulate their far-away looks, the soft lighting, and the limp poses that were often used in paintings of this time. Her close connection to the movement can be confirmed by the painters and writers of the time who sat for her portraits.
Her portraiture style has been heavily influential, using a close crop to the subject’s face which was not previously typical. She also used a soft focus to bring that romantic feel to her portraits, and often paid little attention to the barely-seen backgrounds. She did not even attempt to disguise them as another setting when shooting for her illustrations.
She would coat, expose, and process each wet plate one by one, leaving the lens out of focus and making a long exposure so that a slight blur was introduced when her subjects moved.
Cameron’s work was not popular or appreciated by many at the time she was working. Since the mid-1970s, however, more attention has been paid to her work and the importance of the photographs she took. Many of them are the only surviving portraits of particular artists of the time, thanks to the fact that she was a meticulous businesswoman: each portrait was recorded and registered with the copyright office for posterity.

She was born in Calcutta, India, as Julia Margaret Prattle. Her father was a British official with the East India Company, while her mother was the daughter of a French officer. Her grandfather had been a page of Marie Antoinette. Though the women of her family were famed for their beauty, Cameron herself was considered to be a bit of an ugly duckling – but she had the talent to make up for this. She married a jurist named Charles Hay Cameron in 1838. He was 20 years older than her and ten years later he would retire, allowing them to move to London and reunite with Cameron’s sister Sarah Prinsep. It was Sarah who introduced her to the world of artists that visited the salon she hosted, Little Holland House.
She became friends with Tennyson and other artists before receiving her first camera as a gift in 1863, and began to relentlessly photograph everyone around her. It’s even said that her children became very weary of her constant photography, but the family did support her against criticism from other artists of the time.
In 1875, the Cameron family moved to Ceylon, modern-day Sri Lanka. It was more difficult for her to access chemicals and pure water for her development here, and she was not as prolific during this later part of her life. Most of her work from this time perished. She finally caught a bad chill and died in Ceylon in 1879, having never returned to England.
Her work was then widely dismissed until 1926. Her great-niece Virginia Woolf published a collection of her photographs in this year, and Helmut Gersheim wrote a book on her work in 1948. This gathered pace until the mid-1970s, when Cameron was finally recognised as a great portrait photographer.

“I longed to arrest all the beauty that came before me and at length the longing has been satisfied.”