You are here: Home > All > FLORENCECALL 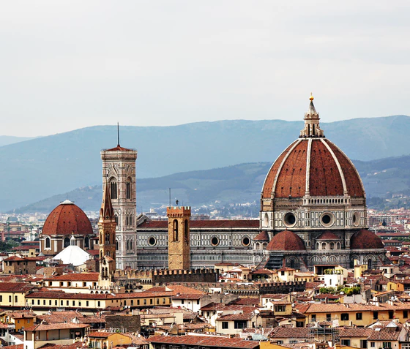 Florence is one of the most prestigious Italian cities, important artistic and financial influences have made this place one of the centers of interest since the medieval period. Considered as the birthplace of the Renaissance there are numerous monuments – the Duomo, Santa Maria Novella, Santa Croce, just to name a few – that characterize the urban context. Giotto, Brunelleschi, Michelangelo, Leonardo da Vinci are, along with many others, the prominent figures who have had workshops in the city, leading to the establishment, since the 12th century, of professional corporations. In memory of tradition, and imagining a building capable of implementing the rich architectural scene, we intend to design a Museum for the Arts and Crafts which will be known by the acronym MAMe and which will become a new cultural center for the old city. This will be a contemporary sign able to dialogue with the pre-existences that surround the project area, implementing the socio-cultural offer of the place. A system for culture in which laboratories and events will encourage interaction between people from different backgrounds who have come to Florence to learn about its history.

PRIZE DETAILS: The winners will be announced on the website of the Association no later than the date of 06th of January 2020. Will be deserving the first three works as well as any other projects which are not excluded special mentions.
# The winner will receive a prize of 500,00 euro (excluding TAX) for each participant.
#Top three finishers will have an annual subscription to the DOMUS magazine in digital format.
#The winners and mentioned might take part for life at all our future competitions that we will propose on
our portal. Not eligible to enter? - Find contest where you are.

JOIN OVER 96,071 PHOTOGRAPHERS GET PHOTO CONTESTS VIA EMAIL FOR FREE