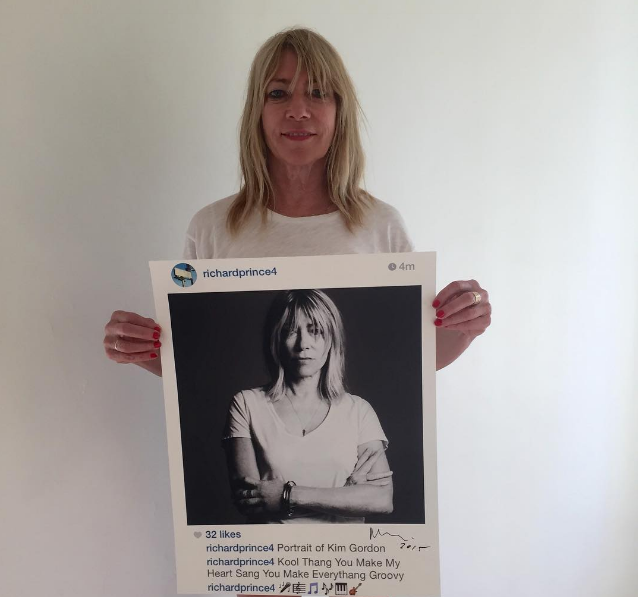 Richard Prince is already becoming synonymous with scandal in the photography world, after the self-described artist starting appropriating work of other photographers to put on his own exhibitions.

In 2014, he famously put together a series of images titled ‘New Portraits’, which consisted of stealing work from other artists, uploading it to his own profile, adding a caption of his own, and then printing out a screenshot of the post. There were already four lawsuits around him, and this fifth one now centres on a photograph taken of Sonic Youth’s Kim Gordon.

The original photograph was taken by Eric McNatt for Paper Magazne. This was a special issue to celebrate the band’s 30th anniversary, and there was a series of photographs put together for the cover and inner pages. The photographic assistant from the shoot has since come out to admit that none of the creative team were paid for the shoot. Even before we get into the fact that such a major magazine can still, in this day and age, get away without paying artists for their work on images included inside the issue, Prince waded in to make his mark.

He used the main photo from the shoot for one of his Instagram gallery images, which quickly earned him some negative comments. The same photo assistant from before compared Prince’s antics to music piracy: he steals the work without having to pay for it, and even ends up making money from it himself. The fact that the team never saw a penny for the work makes this a real kick in the teeth.

Kim Gordon herself made the situation worse when she posted a shot to her own Instagram holding the print that Prince made, thanking him for including her in his work. It’s all a bit of a mess – she could probably now print out her own post and make money off that, too.

As previously noted, this is not the first time that Prince’s work has been contested legally. Unfortunately he has so far been able to win the lawsuits, after judges have ruled that his work is “transformative, and thus fair use”.

His legal team are fairly confident that they will win this one, too. He has, after all, been through this before. They made a statement saying that, “[McNatt’s] complaint fundamentally misunderstands the case law on fair use and how the exemption from the monopoly of rights granted under the copyright statute applies.”

Some of Prince’s work has sold for as much as $100,000, just for the enlarging of Instagram posts with his own added comments and emojis. There is a lot of debate in the art world as to whether the work truly is fair – after all, he hasn’t done any editing of the posts, and only added comments below them. Is that really transformative? Or is it just a case of someone exploiting the grey area of the law as it regards copyright on social media?

This is a debate which will no doubt rage on for a long time, and in the middle of it all, Richard Prince is happily enjoying his position. With each new lawsuit, his notoriety spreads further, while there seems to be no comeuppance for the use of the images.

McNatt is also suing an art website and a publishing house for the gallery photographs and art book they put out using Prince’s Instagram post. The main thing that judges will have to look at is whether this is fair use, and if it is not, it could change the way his other lawsuits are going.

Fine art and photography have a somewhat turbulent relationship where appropriation is concerned. Time will tell whether Prince is the first of many, or a short-lived success who will go down under these huge lawsuits.

JOIN OVER 94,531 and receive weekly updates!