Muğla Escort Aydın Escort Çanakkale Escort Balıkesir Escort
Photo Contest Insider Blog
You are here: Home > Blog > The Most Common Beginner Photography Mistakes (and How You Can Avoid Them!) 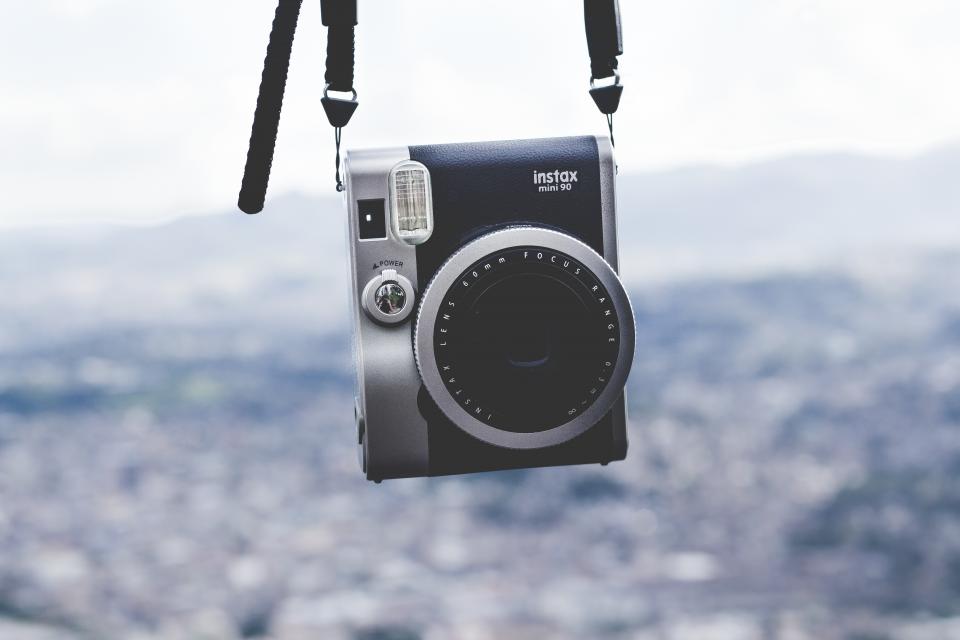 The Most Common Beginner Photography Mistakes (and How You Can Avoid Them!)

As a photographer just starting out in this industry (or even if you’re a little further along), it’s inevitable that you’re going to make mistakes – you are human, after all!

The bad news is that there are plenty of potential and common beginner photography mistakes that you might be making…without even realizing it. But the good news? Once you’re aware of these common photography crimes, they’re so incredibly easy to overcome – we’re even going to tell you how!

Not having a perfectly level horizon

This is certainly something everyone will have done in their lifetime so far, from beginner to pro photographers alike. While it’s not exactly the world’s worst camera crime, it can be irritating to the image’s viewers. Plus, nothing screams ‘amateur photographer’ like a wonky horizon!

Before you start frantically sorting through all of your photos, fear not! Just be sure to keep the following advice in mind next time you go to press the shutter release: use your camera’s grid lines or spirit level feature if it has one (be sure to read your manual or user guide), or if that isn’t an option, simply adjust your photo during the post-processing stage. 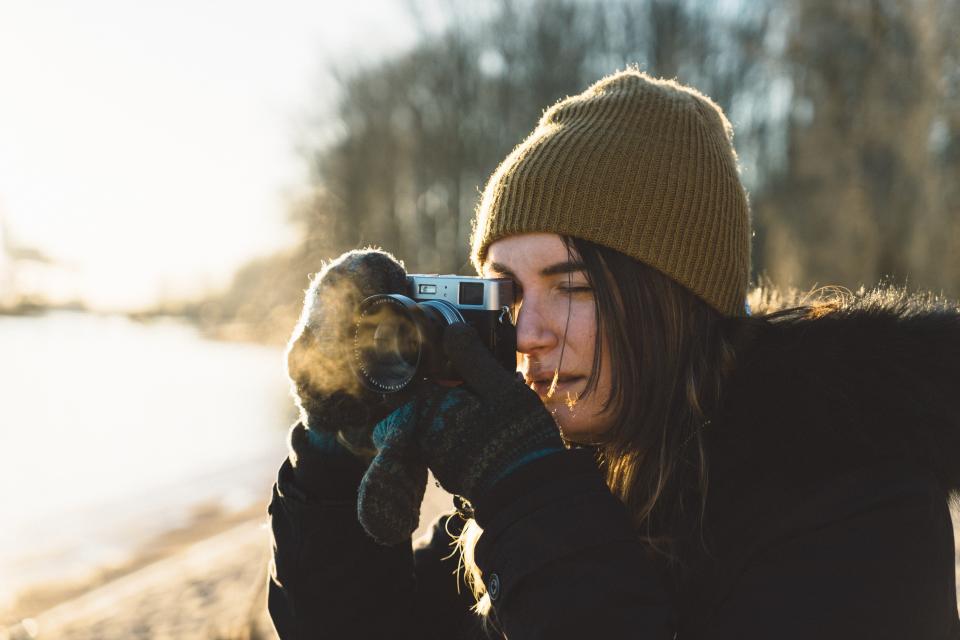 Shooting everything in Auto Mode

While it’s natural for any first-time user of a camera and a beginner photographer to instantly want to capture photographs in Auto Mode, it’s a better idea to shoot in Manual Mode for a number of reasons. Firstly, anyone can capture a photo whilst letting their camera do most of the hard work, but it takes a true photographer to be able to adjust settings and experiment with the camera to capture a unique work of art.

Secondly, when an image is less-than-perfect and captured in Auto Mode, it’s hard to guess what may have gone wrong. Alternatively, when you adjust the settings manually, you can play around with them until the image is perfect and this teaches you a lot about how to effectively use a camera!

Distortion due to using the wrong lens

Some beginner photographers might make the common mistake of using a wide angle lens, for example, to capture a portrait, leaving unflattering distortion in their image. You don’t want your subjects to look warped, nor do you want a loss of color or brightness around the edges of a photo.

When it comes to fixing this common problem, professional photographer Lexy Savvides recommends: “the first step is to choose a lens with a focal length best suited for your subject. Depending on your camera, corrections can be applied automatically in-camera when you shoot JPEG images. It is easiest and most efficient to do it in the photo editing stage with a program like Adobe Lightroom. Lens profiles help to straighten lines, remove vignetting and correct other issues such as chromatic aberrations.” 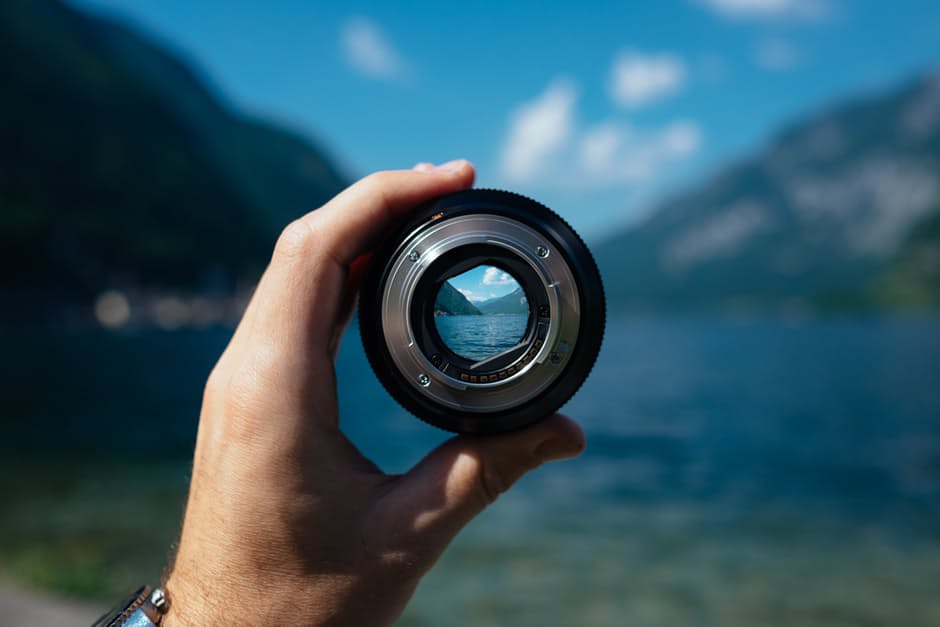 When capturing a photograph, some beginners may not be able to correctly compose their image, resulting in confusion from the viewer or simply a photograph that just isn’t visually appealing.

While this sounds a little vague, the good news is that the solution to this common problem is certainly a simple one – it’s called the ‘rule of thirds’. Most photographers will be familiar with the rule of thirds, but those just starting out in this field may not understand this theory fully.

Digital Photography School explains: “The basic principle behind the rule of thirds is to imagine breaking an image down into thirds (both horizontally and vertically) so that you have 9 parts…The theory is that if you place points of interest in the intersections or along the lines that your photo becomes more balanced and will enable a viewer of the image to interact with it more naturally.”

Another common beginner photography mistake is to create an image featuring a poorly focused subject. Particularly when you are capturing portraits, you want your subject to be the most notable and eye-catching element of that photograph.

The focus of your lens (especially when you’re using auto-focus) may pick up on an object in the foreground, choosing to sharpen that instead, leaving your subject blurry and in the background. While this can sometimes create an ‘arty’ or intriguing look, often it is not the style of portrait that a client (or the photographer for that matter) will be after.

Professional photographer Lexy Savvides recommends: “to ensure the system chooses the right point of focus for static subjects, change the focus mode to single point AF. This will force your camera to use just one AF point of your choice, rather than relying on the entire cluster of AF points to find focus.” 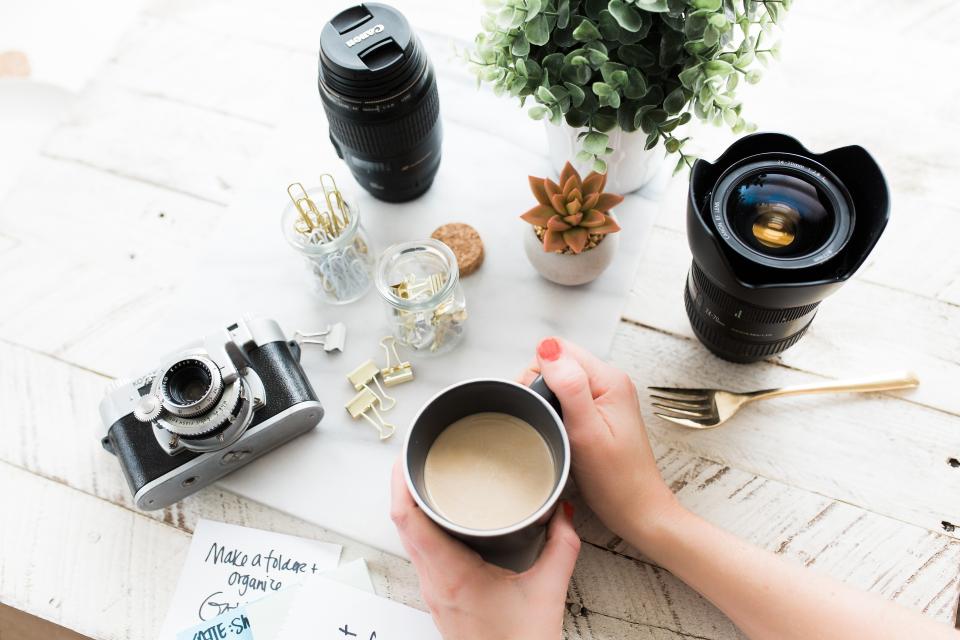 Speaking of focus, this is perhaps the most common beginner photography mistake of all. If there’s one thing that ruins a potentially beautiful photo, it’s a blurry and fuzzy appearance.

This can be caused by many factors, including the camera choosing the wrong point of focus when using auto-focus mode, subject movement, or even camera movement during the exposure.

So how do you avoid or fix this common mistake? Thankfully, there are a number of simple solutions to unwanted blur.

Firstly, you could use a tripod to prevent camera shake or movement. You could also increase the ISO sensitivity, or make the shutter speed faster. Another solution is to turn on image stabilization either in-camera or on your lens, or lastly, you should avoid shooting at very wide apertures such as f/1.8 as this can greatly affect the sharpness of a photo.

Many beginner photographers may be frustrated by the continuously dull and dark photographs they’ve been capturing. This is another problem that’s hard to combat unless you know exactly what you’re doing wrong, so let’s look at some of these causes below.

Firstly, your camera might deliberately underexpose your image to allow for the amount of light determined based on the meter reading. While that might sound a bit tricky or complicated, a simple, two-word solution is what you’re after: exposure compensation. This can be toggled when you’re in automatic mode and the button you’re after looks like a plus and minus symbol i.e. +/- 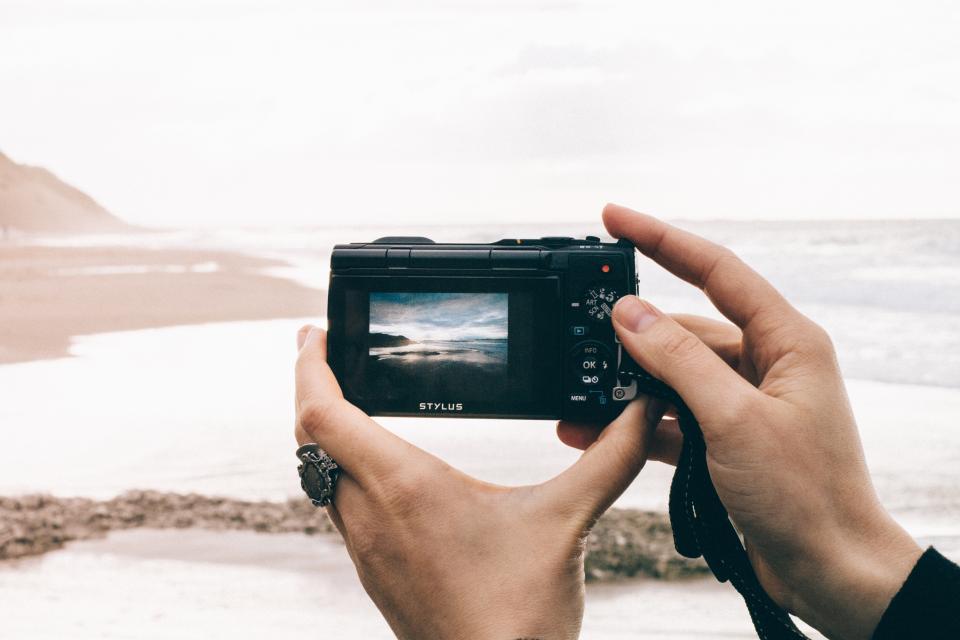 While capturing brilliant photos is fun, the post-processing part can be just as enjoyable as it allows photographers to flex their creative muscle even further and truly bring their image to life. Professional photographers will understand the importance of small, natural-looking tweaks (unless they specialize in the surreal photography genre, for example) in order to retain an image’s natural beauty.

Some beginner photographers, however, may over-post-process, resulting in an unpleasingly saturated or ‘exaggerated’ image. Unless this is the desired look, many viewers are often put-off by these heavy and unnatural effects.

To combat this issue, it’s recommended that beginner photographers strengthen their camera skills first so that their images will require less post-processing (i.e. adjusting brightness, color, etc.) Remember, you should only use programs such as Photoshop and Lightroom (for example) to further enhance your image, not overpower it.

You should also avoid applying the same effect or filters to batches of different photographs. For example, a beautiful sunset scene may benefit from increased pink and orange hues, but a portrait of someone probably won’t!

Not close enough to the action

Unless you’re in a stunning location that requires you to capture it on a grand scale with your subject in the shot (for example, a mountain scene), then you’ll want to get close to the ‘action’ or subject of your photograph for a truly effective image.

Some beginner photographers are a little hesitant to get close-up to their subject, and as a result, this produces a less effective and less emotive portrait. You also don’t want too much going on in the background, as you truly want to draw your viewer’s attention to what matters the most. 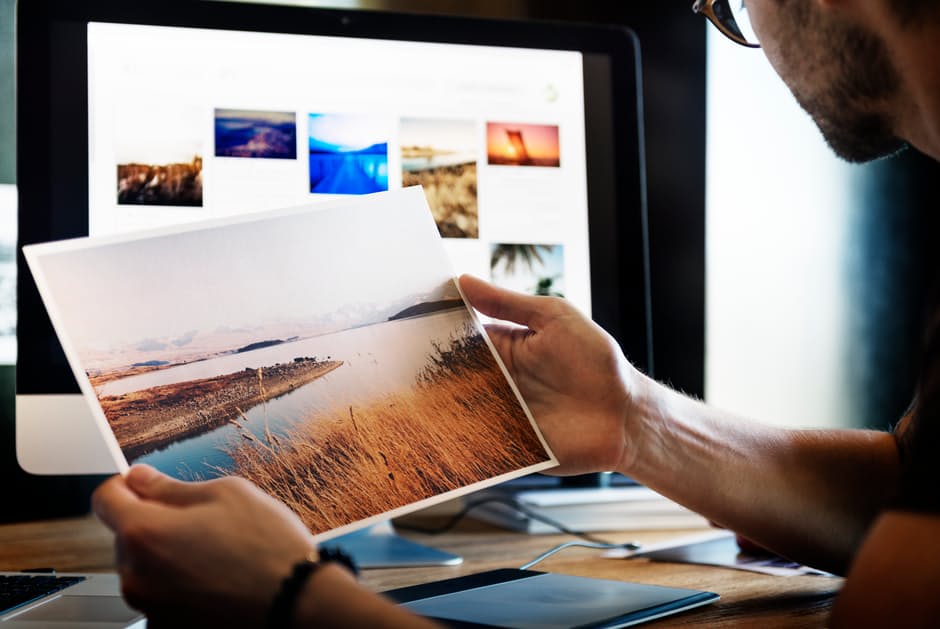 Showcasing too many photos

Here’s a photography crime that is often committed by beginner photographers! While it’s exciting to begin capturing plenty of images, you really must be strict when uploading and showcasing these images on your website, portfolio, and social media.

Too many photos will overwhelm a viewer (or potential client!), plus if you’re not being strict about the quality that you showcase, you may be publishing a few less-than-awesome photos and undervaluing your talent.

Photographers should always be highly-selective of the work they display and the easiest way to do this is to limit yourself to only publishing the images you’re super proud of. It might be just one, two, or three photos from a set of images, but as long as these are the most breath-taking of the lot, then you have nothing to worry about!

Relying on the LCD or preview screen

After a beginner photographer captures an image, they will naturally view it on their LCD or preview screen before moving on to shooting the next one. Here’s the catch though: almost everything looks crisp and perfectly sharp when reduced down to that tiny size.

To truly assess a photograph’s quality, photographers should be zooming in on the image and ensuring that it is sharp enough. Trust us, the uploaded image on your computer may look very different to the one on your camera’s tiny screen, and you don’t want to realize before it’s too late! 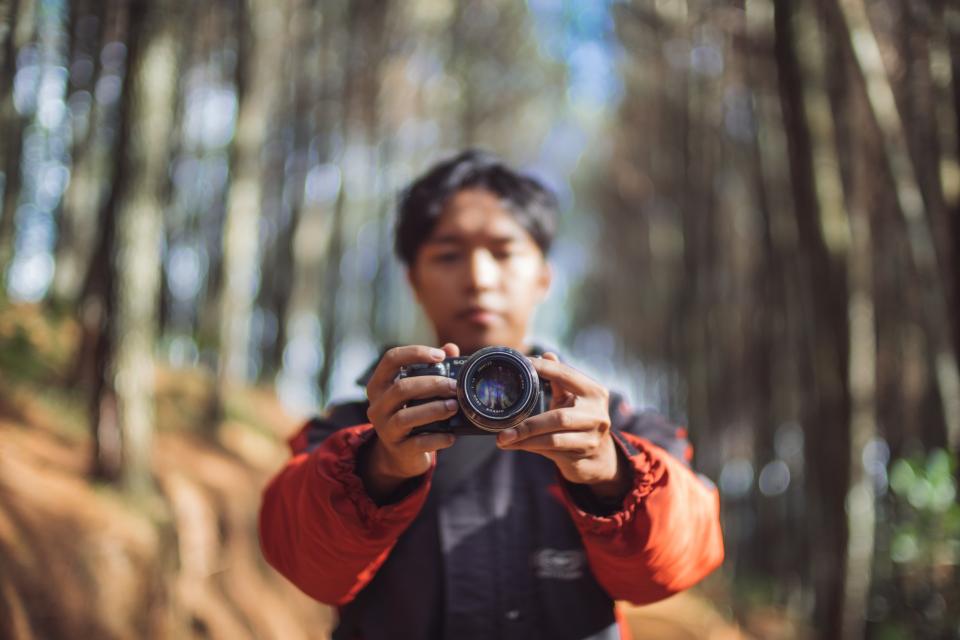 Not backing up photos

Here’s another one of our common beginner photography mistakes that could cost you more than just a bunch of pretty images! We’ve all heard horror stories of a photographer’s first wedding gig, only to have a memory card malfunction, resulting in them losing all of those precious (and never-to-be-repeated) memories. Ouch!

To avoid this catastrophe, photographers should always back-up their photos, especially during huge events such as this. Bring a laptop, an external hard-drive, and don’t forget to save copies of the images on an additional storage source such as Dropbox.

To a beginner photographer, this might sound excessive, but the peace of mind gained from taking these precautions is truly worth it. Plus, you don’t want to be that person kicking yourself if things go wrong!

We hope learning about these most common beginner photography mistakes, along with the ways that you can avoid them, will help you to increase your knowledge and skills in photography. Best of luck!