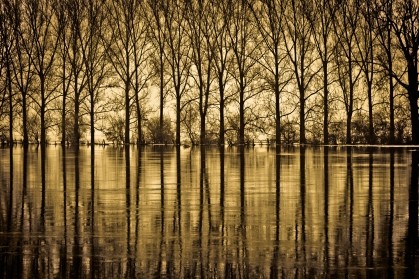 Canon Europe has announced the winner of its pan-European EOS Adventure photography competition for a stunning shot of a Polish national landmark. Facing fierce competition, Krzysztof Grygiel of Gorzów Wielkopolski, from Poland triumphed over more than 83,000 entries and has been recognised as one of the best rising photographers in Europe for his shot of the famous Polish river, the Warta.

Krzysztof’s evocative shot impressed the judging panel of professional photographers with its stark silhouettes and precise symmetry of bare trees, reflected in the shimmering water. The photo was praised for the sharp, strong trees against the open river which struck a balance between beauty and power, capturing the Polish icon in its autumnal glory.

The river, one of the country’s largest, passes through Krzysztof’s home city of Gorzów Wielkopolski in North West Poland. He took inspiration from regular walks along the river, where he watched the leaves fall to reveal a different type of natural beauty. From a winter river to the rolling plains, Krzysztof won an incredible, once–in-a-lifetime safari adventure, to the magnificent Masai Mara National Reserve in Kenya.

Canon ambassadors and two of the world’s most acclaimed wildlife photography experts, Jonathan and Angela Scott, ‘The Big Cat People’, gave Krzysztof a series of personal photography lessons as they chased lions across the Serengeti in an off-road vehicle and soared above herds of wildebeest in a hot-air balloon. Krzysztof also won a new Canon EOS 7D to put through its paces as he came face-to-face with pouncing lions, wandering warthogs, and much more, as well as a free 10 year Flickr pro account from Yahoo!.

In addition to the overall winner, 59 aspiring photographers from across Europe also won prizes for a stunning array of images including portraits, landscape and macro photography. Each was rewarded with an EF/EFS Lens to continue their photography adventure. The entries were submitted under six categories: Learning to See, Getting in Close, Using your Environment, Lights and Landscapes, Moments in Motion and Subject Standout.

Nigel Taylor, Marketing Communications Director at Canon Europe said, “We set out to encourage people to kick-start their photography adventure and inspire them to learn more about DSLR photography. The tutorials and top tips were viewed over 700,000 times and more than 83,000 photographs were submitted by photographers across Europe. The judging panel were really impressed by the level of skill and it was a difficult decision but Krzysztof’s shot of the Warta River impressed the judges with beautiful composition and balance. The image shows just what is possible when you pick up your DSLR and ignite your passion.”

Krzysztof Grygiel, winner of the Canon EOS Adventure competition said, “I am thrilled to have won the Canon EOS Adventure competition. I never imagined that having fun taking photographs could take me from the Warta River to floating over the Masai Mara in a hot-air balloon with some of the most talented photographers around. This photo means a lot to me, I have always been inspired by the light and reflections of the Warta River and capturing the perfect image has proved a worthwhile challenge.”

Nicolas Bidon, Director, Brand Display, Yahoo! EMEA, comments, “The EOS Adventure competition attracted over 2.6 million people to Yahoo!, which demonstrates just how eager people were to learn more about photography. The comments from photography enthusiasts on Yahoo! and Flickr have been brilliant, they loved watching the “Essentials of Photography” tutorials from professional photographers, and flooded Flickr with their amazing results.”

JOIN OVER 88,510 and receive weekly updates!