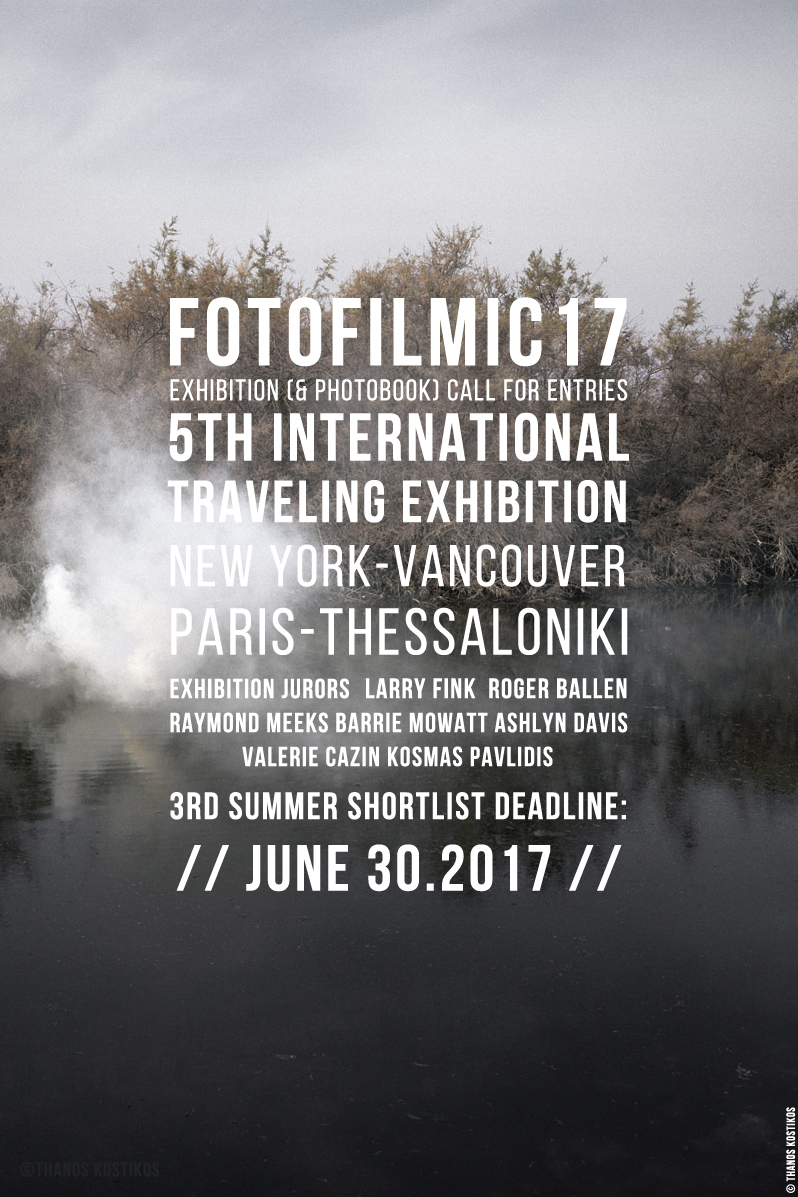 The 30 last SUMMER photographers will be announced on July 3rd & published daily thereafter bringing the 6-month FOTOFILMIC17 SHORTLIST competition to completion with a total of 90 artists to be juried in July. FINAl FOTOFILMIC17 TRAVELING EXHIBITION WINNERS ANNOUNCEMENT MONDAY JULY 31, 2017

FOTOFILMIC17 TRAVELING EXHIBITION Vancouver // New York // Paris // Thessaloniki
The FotoFilmic17 Traveling Exhibition’s roll-back-in-time itinerary will take its 30 laureates across 4 world cities spanning the New World and the Old Continent from the west coast shores of Vancouver, Canada to New England’s Empire City New York, then across the Atlantic to the City of Lights Paris, France, and deep to the historical heart of Europe to Thessaloniki, Greece.

REQUIREMENTS All photographs and books submitted must have been integrally shot either on film in any format or captured analogically (no digital capture). This is an open theme call and submitters can enter up to 10 images (individual images or series) and 1 Photo Book per entry.

COPYRIGHT: All works entered must be the photographer’s own. Entrants also guarantee that all copyrights corresponding to the work submitted in their name are theirs, or that in the case copyrights have been ceded to a third party they have effectively obtained express authorization from the third party to use their imagery for the purpose of being exhibited and published as part of FotoFilmic17.

Entrants certify that they have received in written form appropriate release from all models and persons featured in the work they enter regarding possible commercial uses. USAGE RIGHTS: By submitting work to the FotoFilmic17 International Traveling Exhibition and its SHORTLIST Calls, photographers also agree to the restricted use of their imagery for promotional purposes in relation to FotoFilmic17 online publications as well as printed marketing materials.

JOIN OVER 94,274 PHOTOGRAPHERS GET PHOTO CONTESTS VIA EMAIL FOR FREE